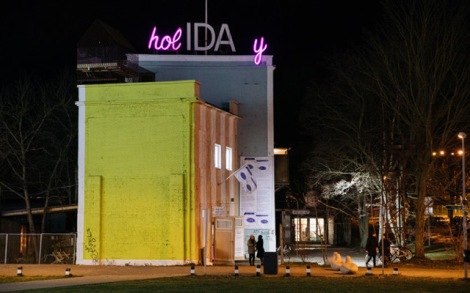 Feel invited to join the series of public lectures dedicated to curatorial practice outside the institutional context with participation of Nataša Bodrožić (Zagreb), Maja Ćirić (Belgrad) and Anders Härm (Tallinn).
The invited curators will share their own work experience gained in various international projects, such as The Venice Biennale, Mediterranea Young Artists Biennale, etc., will present the contexts in which they operate and topics of public interest, bringing examples of new platforms made available to artists and audience interested in contemporary art.

There is no better catchphrase for EKKM than “fake it ‘till U make it”. Started in the November 2006 as a squat run by four artists/curators (Neeme Külm, Marco Laimre, Elin Kard, Anders Härm) and a bunch of enthusiastic art students from different faculties of the academy, the do-it-yourself art museum is now one of the most important non-institutions of art in Estonia. Born out of the dissatisfaction with the local art scene and the sincere wish to do things differently, EKKM created itself out of the blue as a punk gesture approximately at the same time when the Estonian Art Museum opened its new headquarters in the spring of 2006 – the new and fancy Kumu art museum did not satisfy the establishers of EKKM conceptually nor ideologically, so they decided to provide a different curatorial as well as artistic platform for the international and local art workers as a counter-public non-institution using impudently the detourned title of the art museum and the symbolic capital, that quit unexpectedly, came with it.

The lecture draws from the vast legacy of curating, as a form of instituting values by the means of specific curatorial and social methods but focuses on the current narratives and attitudes that inevitably and progressively expand the role of an art institution within the contemporary society. The possibility of an idealistic, non-toxic, non-corrupt, context-responsive, eco-conscious, non-dependable and hyper-active institution will be discussed from the curatorial point of view.

„Consumer Culture Landscapes in Socialist Yugoslavia” (publishers: Slobodne veze/Loose Associations (Zagreb) and Onomatopee (Eindhoven) is the latest publication produced within the Motel Trogir project, which since 2013 deals with critical reinterpretation, evaluation and preservation of the mid 20th century architectural modernism in Croatia and wider region of ex Yugoslavia. Besides presenting the book, Nataša will try to reflect on the last (almost a) decade of being active in the field more and more labeled as „heritage activism“ through the Motel Trogir project, with a special focus on curating and art production, which makes one of its important segments.

This program of public lectures is organized in the frame of the Winter Curatorial Course addressed to students and educators, emerging and established artists and curators, interested in curatorial practice in the field of contemporary art: http://www.oberliht.com/curs-curatorial/